Howdy folks,
Carla Seidl visited this fall asking about the amazing wild yam we call air potatoes. She collected a lot of interesting info, met some interesting characters, and wrote this fun article about her investigation. It appears in her blog/website, Earth Flavors, profiling local foods. http://earthflavors.net/flavor20.html
FAIRY POTATOES
by Carla Seidl

On a recent tour with wild foods educator Alan Muskat, our group stumbles upon what looks like tiny potatoes growing on vines. “I call these fairy potatoes,” Muskat says, popping one of the marble-sized tubers into his mouth. “It’s a wild yam, technically…it’s commonly known as cinnamon vine. You can cook them like potatoes,” he says. “If you have kids, you can make fairy french fries.”
The very next day, as I turn a corner in my neighborhood, I literally run into the same plant, vines full of tiny tubers. I roast some in the oven with olive oil and salt, and they are delicious. With their small size and large percentage of skin-covered surface area, I have the feeling, too, that they’re packed with vitamins and minerals.
An Internet search on cinnamon vine, however, clouds my enthusiasm. Descriptions of the air potato, as it’s more often known, include phrases like “invasive” and “possibly poisonous,” giving me pause about the curious bounty upon which I’ve been triumphantly feasting with my toddler.
I write to Muskat for clarification. Dioscorea polystachya, he replies, is the local, edible variety — not to be confused with the D. bulbifera that plagues folks in Florida. (D. polystachya also seems to be called D. oppositifolia and D. batatas, depending on your source.) 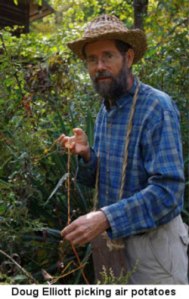 Muskat points me in the direction of local herbalist and storyteller Doug Elliott, who, in his book Wild Roots, writes that the air potato was originally brought here as an ornamental plant from China, and carries another name: Chinese yam. The name cinnamon vine comes from its small white cinnamon-scented flowers that bloom in midsummer.
At his homestead in Union Mills, Elliott tells me that the air potato also has delicious tubers under the ground, but these can be hard to dig up. He and his wife mostly use vine-growing air potatoes, either boiling them like regular potatoes or rolling them around in a hot, well-oiled frying pan.
Elliott, author of such works as the children’s collection Crawdads, Doodlebugs & Creasy Greens, knows songs and stories about all kinds of plants, but none for the air potato — yet. “I don’t know how long this has been in the country,” he says, but “probably not long enough to have too many songs or stories associated with it.”
Elliott does, however, point me in the direction of his friend Clyde Hollifield, whom he describes as a local, “folkloric character.” He says Hollifield has a story about the air potato being the potato of “the little people,” saying that we big people who live above ground plant our big potatoes below ground, while the little people live underground and they plant their little potatoes above ground.
“The little people?” I ask. But Elliott says I should hear the story from Hollifield himself.


The Little People
Hollifield lives some 18 winding miles southeast of Black Mountain and introduces himself as a local person who’s been “grandfathered in.” A former instrument builder, woodcarver, puppeteer, community college instructor, and rehabilitator of birds of prey, Hollifield is full of neat tricks, like making a miniature little people’s rain jacket out of a poplar leaf, and fitting a hand-carved miniature banjo magically into a bottle. Hollifield introduces me to the traditional, fly-operated Appalachian “flypig” folk toy, which he builds out of pecans and other nuts and is trying to revive. http://www.flypig.us/
“The little people’s potato,” he says of the air potato. He, too, has the aerial-tuber-dotted vine growing on his property, some meters up from a replica of Stonehenge. “‘Cause it’s so tiny, you know what I mean? But it’s so small that it would have to be the potato of the second little people down.”

I tell Hollifield that I am unfamiliar with the idea of the little people. “Are they like fairies?” I ask.
Not exactly, he explains. They are more like people. “They have the same lifestyle, but are mythological, I guess you’d say, or magical….”
Hollifield has always been fascinated by Native American ideas of the little people. “I’m part Cherokee myself, like everybody here,” he says. The other part is Celtic. Specifically, from the MacDuffie clan, which he says comes from Gaelic words for black fairy.
Hollifield points out that in European folklore, there’s a whole menagerie of mythological creatures, like trolls, goblins, elves, and hobbits, who, like the Cherokee little people, are said to have lived underground, under the rivers, in rock piles, or other in-between places.
This is no idle chatter. One of Hollifield’s stories appears in a book on Cherokee little people, and he himself has written and illustrated an impressively detailed fantasy manuscript called The Cedar Creek Fairies that draws from local ecology.
Hollifield says that the Cherokee name for air potatoes is nuni. He’s not sure how long the plant has been here, but he’s sure he’s heard this from several people. Then again, he says, the Cherokee also have a name for elephant.
A lot of Native American people of all tribes will not discuss the little people, says Hollifield, though they firmly believe in them. “It’s a spiritual thing,” he says. “It’s considered dangerous.”
According to Hollifield, there’s a tricky way of getting around this taboo, however, people saying things like “I heard…” or “Someone said…” rather than directly revealing their personal encounters with the little folk.
I ask Hollifield how cinnamon vine is related to the little people.
“I probably made up the connection between the nuni and the little people,” admits Hollifield. “I probably told that on a whim to Doug. That sounds like something I would say.”
Still, he explains, in Cherokee and many other native cultures, little things are more important than big things. For instance, in medicine, folks often say that the little medicine is the strongest: a small root may be stronger medicine than a large root. This general rule applied to many things — among them, certainly, the little people.
“They were allies, in a different realm,” says Hollifield. “It wasn’t necessarily good to see them. It might be dangerous.”
I think back to the tour with Alan Muskat, where I first encountered the air potato. “Fairy potatoes,” he told us, with a half-smile. “A name I made up, but it’s a little bit dangerous, right?”
As with picking wild food in general, my search for information on the air potato seems something of a shadowy treasure hunt. Each person I encounter along the way seems to shun the well-beaten path, purposefully veering outside the mainstream in order to access something richer.
I’m reminded of a comment Doug Elliott made on his and his wife’s homesteading lifestyle: “We do go to the grocery store, but not very often, thank goodness.”
Chinese Roots

After visiting Elliott and Hollifield, I make an appointment to interview Dr. Dongping Han, another person with whom Doug Elliott recommended I speak.
A professor of Chinese history and political science at Warren Wilson College, Dr. Han is a man to whom the air potato is no mystery; he grew up with this plant in China and now grows it in his yard, boiling the air potatoes in season and eating them as a snack.

“When I was growing up, this was one of one of most important plants my family and my extended family grew,” Han says. In China, it’s renowned for its healing properties as well as for food.
The tiny vine-growing air potatoes are dipped in sugar and cooked and sold on a stick during New Year time, says Han, but it’s the underground tuber of the plant that’s prized among the Chinese as a foodstuff. Cooked with chicken, it is a favored dish for important guests.
“If you read the Chinese medical book, it’s good for anything almost,” Han says about the yam. It has a sweet, neutral nature that is said to be beneficial for the kidney and the spleen and help balance chi within the body.
Since the root can grow up to six feet long, it is sometimes cultivated in a tube or pipe due to the difficulty of harvesting it so deep in the soil.
“If you cook the root,” says Han, “once you take the skin off, it’s very sticky, and slippery. The Chinese believe that anything like that is good for your health.”
Han says the air potato is found all over China, but primarily in the North. He is not aware of any poisonous varieties.
So perhaps, I think, the shadowy treasure hunt ends here.
“What’s the name of the air potato in Chinese?” I ask. “Shan yao,” Dr. Han says, spelling it for me. Shan means mountain; yao means medicine. When I look that up on the Internet, I get another surprise.
Due to its use as a tonic for both “congenital and acquired ailments,” several sources say, the Chinese apparently have another name for this superstar mountain yam: fairy food.
And no, I’m not making this up.

I hope you enjoyed that multicultural YAMmering . Feel free to check out the products page of my website to take advantage of the

An Evening with Doug Elliott  DVD
Stories, Songs, and Lore Celebrating the Natural World
Elliott performs a lively concert of tales, tunes, traditional lore, wild stories, and fact stranger than fiction–flavored with regional dialects, harmonica riffs, and belly laughs. One moment he is singing about catfish, the next he’s extolling the virtues of dandelions, or bursting forth with crow calls. He also demonstrates basketry, ponders the “nature” in human nature, tells wild snake tales, and jams and jives with his fiddler son, Todd.
Normally $20 — NOW only $15