February 2nd is not far off.! So, what about the groundhog?
It turns out that February 2nd is a big day. It’s a cross-quarter day marking the halfway point between the winter solstice and the spring equinox. This is an ancient pagan celebration time known as the Festival of the Return of the Light. It’s a celebration of rebirth and renewal. In Gaelic Ireland it was known as Imbolc, the festival marking the beginning of spring. But what about the groundhog?

In the northern temperate regions all around the world, folks noticed that the beginning of February is often the coldest time of the year. But even though it’s cold, the days are getting longer, the light is coming back. And with the light will come the warmth, and with the warmth will come the growth, and the world will be born anew. The seeds aren’t quite germinating, but the fire of life–that essential spark–is there. The light will return. But what about the groundhog?
February 2nd is also 40 days after Christmas. We all know the Virgin Mary was a nice Jewish girl. She was a devout follower of the laws of Moses, and according to ancient Jewish tradition, a new mother, after childbirth, spends 40 days in rest and recovery. Then after 40 days she takes her child to the temple and makes an offering, acknowledging that this is a child of God. With this offering, the child is redeemed from God into the care of the mother. So, this is what Mary did 40 days after Jesus was born. Now among many Christians February 2nd is a holy day, known as the Day of the Presentation of the Lord at the Temple. Since Christians see Jesus as the light of the world this implies a direct connection to the old Festival of the Return of the Light. But what about the groundhog?
In the old days people saved the drippings from the candles burned during that long winter darkness because tallow and wax were very precious. On February 2 they would remelt the wax and make the candles anew, celebrating the light coming back to the world. In many churches to this day, this holiday is still known as Candlemas. Hallelujah! The light is returning to our world! But what about the groundhog?
Early February is the time to check your supplies–take inventory. Check your stored food; how are your canned goods holding out? Check your woodpile; do you still have half of your firewood? Check the hay in the barn. February 2nd is considered the halfway point of the cold weather and if you’ve still got half your food and supplies left in the beginning of February, you should have enough to last til spring.

February 2nd, Candlemas day,
Half the grain and half the hay,
Half the winter is passed away,
We’ll eat our supper by the light of day.

Okay, the light is returning! That explains a lot, but what about the groundhog?
I’ve heard it all my life, you’ve probably heard it too: Mr. Groundhog comes out of his den on February 2nd and if it’s a cold, blustery, overcast, sleeting or rainy day, Mr. Groundhog stays out and spring arrives, right?
If it’s a beautiful, sunny day, Mr. Groundhog comes out of the ground, sees his shadow, gets scared, dives back into the ground, and we get six more weeks of winter! I’ve heard that all my life and it never made any sense to me–until I started researching groundhogology.
Groundhog Day is a throwback to ancient bear and badger cults from Europe. These folks didn’t so much worship these critters as much as they watched them. 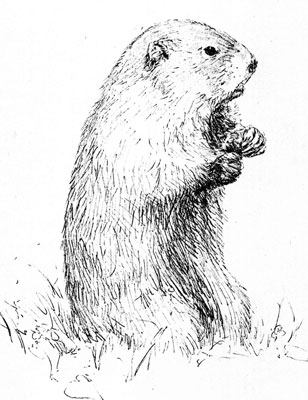 They watched these hibernating animals go into the ground in the fall and they didn’t come out. It was as if they died. The next spring however, when the world was being born anew they would miraculously rise up out of the earth as if they, too, had been reborn. The ancient ones realized that the life cycle of these hibernating animals is a great metaphor for the human spiritual journey. As we walk through this world our shadow is always with us. We all have a shadow that’s with us for all the days that we walk this earth. When we die and they put us in the ground, and when that hibernating animal goes into the ground in the fall, the shadow disappears. That shadow, the symbol of the soul, is set free and the animal sleeps the sleep of death. It becomes a part of the underworld–one with the earth. Early in spring as the time of rebirth and renewal approaches, the animal emerges from the underworld and if some of that old shadow–the old soul–is still attached, the process isn’t complete so the animal must return and continue sleeping that sleep of death until it is ready to be reborn completely anew.
That’s why we say if Mr. Groundhog sees his shadow we are going to get six more weeks of winter.

We’ll dig down and we’ll dig deep,
We’ll find that whistlepig where he sleeps
Oh Groundhog!

Hi Friends, I hope you enjoyed that taste of groundhogabilia and that you’re getting ready for the big cross-quarter day. We’re celebrating by offering a couple books and a CD at a discount. They each have something about groundhogs and lots of other interesting lore.
Feel free to check out the products page of my website to take advantage of the good deals. https://www.dougelliott.com/products.html

It all starts in Elliott’s mountain-side cabin with a gift from an old groundhog hunter. From there we go on a rollicking and revealing journey into folklore, history, and mythology. You’ll hear how groundhogs have been a source of food, clothing, medicine and music . You’ll learn the mystical aspects of groundhogs — how they are woven into Native American and European mythology. You’ll get clues to the great riddle: How much wood would a woodchuck chuck…? You will learn how groundhogs can teach us about ourselves, our society, and world politics today! This telling is flavored with traditional songs, lively harmonica riffs, belly laughs, and wood-chuckles. 55 minutes (Storytelling World, Honor Award)
Click Here for CD 1/3 off Normally $15 —NOW only $10

Discover how to catch crawdads, puree pawpaws, gobble greenbriers, noodle catfish, tickle trout, cook squirrel brains, twist a critter out of its hole and predict the weather with a persimmon seed. Learn how to sing Oh Groundhog. Hear about Queen Elizabeth when she was courted by a frog, Copper John Higgins when he swallowed a lizard, and Davy Crockett when he tried to grin a squirrel out of a tree. This 64-page book features two dozen songs, more than 90 original illustrations and a plethora of stories and lore.
Click Here for 20% off Normally $5–NOW only $4

The Hardback Book:
WILDWOODS WISDOM
Encounters with the Natural World

With the engaging voice of a country storyteller, Elliott draws on his own adventures–hitchhiking across the country, capturing snakes, tracking animals, hunting ginseng and searching out the wisdom of country folk and native peoples. You’ll hang out with Native Americans, Appalachian mountain men and biologists. And you’ll hear stories of Pentecostal snake handlers, hoodoo root doctors, possum breeders, and even a New York stockbroker. Join “Ranger” Doug as he stalks old time apples, disciplines coons, stalks groundhogs, and befriends possums. Beautifully illustrated with over 100 drawings by the author, Wildwoods Wisdom is a journey of awakening, of being at home in a world we may not often see, but to which we are forever joined. 196 pgs
Click Here for 15% off Normally $23–NOW only $20

4 thoughts on “What About the Groundhog?”