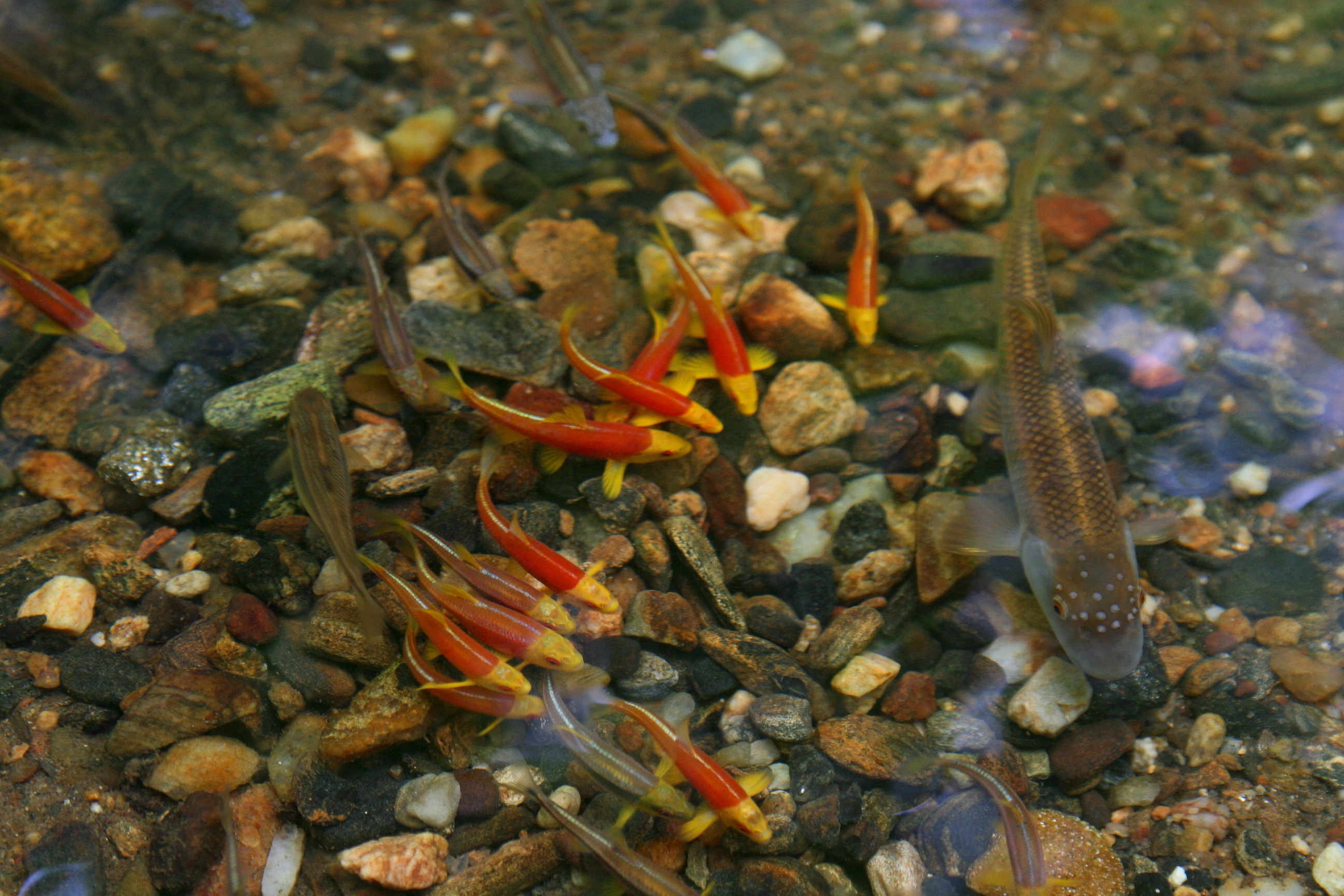 A swarm of bright red fish! That’s what I was seeing in this clear piedmont creek one sunny April afternoon. (I know I should call them a school since they were fish, but these were so tightly congregated–thirty-some, two-inch fish swimming madly in a cluster about a foot in diameter–they seemed more like a swarm.) They had yellow heads and fins,but their bodies were a brilliant red. These were male yellowfin shiners in a mating aggregation. Rather than a swarm or a school, this aggregation might properly be called a “lek”. A lek is a biological term for an assemblage of males congregating to attract females for mating. (The closest human equivalent we might have is a fraternity party or dudes on the street corner.)

These beautiful fish were hovering over a neat pile of small (1-inch) rocks. The rock pile was about a foot in diameter at the tail end of the pool.

I sat down on the creek bank and watched with binoculars, and before long, as they got used to my presence, I began to see different fish in the pool. There were several species engaged in a constant flurry of activity–chasing, feeding, and courtship. It seemed like there were fish with at least four different color patterns present. It was hard to know how many species because in some species of fish, including these yellowfin shiners, males and females have different patterns. The male yellowfins are bright red for only a few weeks during the spawning season.

Then two slightly larger (4 inch) fish moved into the center of the aggregation of yellow fins. At first I thought they might be feeding on the eggs that had been deposited by the yellowfins until I saw one of the fish swim to the edge of the rock pile, pick up a stone in its mouth, carry it to the center of the pile, and drop it. A four-inch fish carrying a rock that was practically an inch in diameter! It seemed like only one of the pair was the rock carrier. (It’s a guy thing.) I saw it transport at least a dozen rocks. This fish was tan-colored with a blue-grayish head with lumps on it. This was most likely a bluehead chub, one of the creek chubs locally known as “knotty-heads” or “horny-heads.” In spring the males develop these “nuptial tubercles” on the head. I had thought that these hardened growths were used to root or move stones around in the stream bed to create these stone nests. But my observations showed me that they simply pick the stones up with their mouths. Apparently, the male’s nuptial tubercles are used in courtship and mating. (The better to nuzzle you with, my dear!) So horny-heads is a perfect name for them. So once again we learn the appropriateness and wisdom of folk names. Nuptial tubercles–what a concept! I might be able to use a few of them sometime myself…

My later reading indicates that as many as 30 species of fish use these rock piles constructed by the chubs for laying their eggs. Apparently, this pile of similar sized rocks offers good aerated water circulation for the developing eggs as well as protection from silt and predators. A large male chub may carry over 7,000 stones, each as large as his head, as far as 25 yards to his nest site.It’s interesting to think of the lowly chub as an “ecosystem engineer” or a “keystone” species with a number of other species depending on the chubs to create optimal breeding sites. There are several species of chubs in different parts of the country that build these nests. So, keep your eyes on the creeks this spring. You might find yourself engaged in some very fishy, sexy, aggregations!

For more information: Brandon Peoples and William Roston have excellent videos of the activity around a bluehead chub’s nest. Check out their site Within Our Waters!