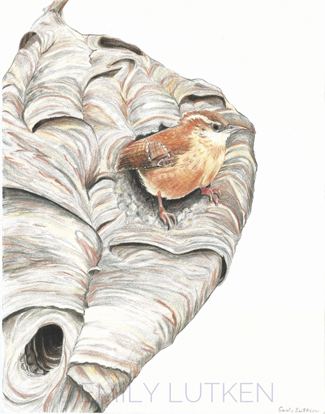 A Variation on the Birds and the Bees

We’ve always been fascinated by those large, gray bald-faced hornets’ nests. If we can find one within reach, we’ll wait until after a few hard freezes, then cut the branch with the nest and put it in the rafters of our open porch. At that time of year there never are any live hornets left in the nest. At the end of the season they all die except for the mated females who will be next year’s queens. They fly off and hibernate in cracks or crevices. In Spring each female starts from scratch building a new nest. To build their paper nests they collect grayish-colored, weathered wood particles from dead trees and fences. They chew it up and add a waterproof glue from their saliva. 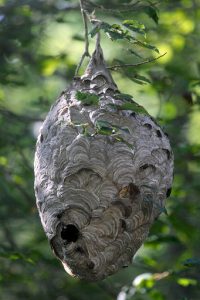 The nest is small at first and the new queen lays just a few eggs. When they hatch and develop, these will become the first workers. They start bringing in more paper pulp and enlarging the nest. The queen keeps laying more eggs and the colony keeps growing until it is as big (or bigger) than a basketball and can house a few hundred hornets. Stay away from those nests in summer and fall; hornets are very defensive of their home–they have powerful stings and no sense of humor!

After we put the nest up in the porch rafters, we noticed pieces of the nest paper on the floor underneath it. Something had torn a large hole in the side of the nest. There was also a neat little pile of bird droppings underneath the nest. In the evening, about twilight, we noticed there was wren activity around the nest. We realized that it was the wren that had torn the hole in the side of the nest and it was roosting in there. This has occurred every year for more than a decade. We realized that the Carolina wren is the only eastern North American wren that does not migrate. The northern range of the Carolina wren is determined by the severity of the winter. At the northern edge of its range a severe winter can decimate local wren populations.

Wrens that can find a hornets’ nest (especially one in a sheltered, dry location) have a winter survival advantage. Those many layers of hornet-made paper with dead air space in between provide great insulation and an ideal, cozy roosting site protected from the frigid winter winds. (photo caption: Sleeping wren nestled in a hornet’s nest on a cold winter night)

Todd Elliott did a search of the ornithological literature and found this phenomenon was reported almost 100 years ago. We published our findings in The Chat which is the official publication of the Carolina Bird Club. You can read the article here.

Many thanks to Todd Elliott for the photos, and to Emily Lutken for the illustration of the wren and the hornets’ nest.

For more literature, lore, stories, and songs celebrating the natural world check out my website here.

My 2020 calendar of performances, classes, and other events is coming together and can be seen here.

1 thought on “The Wren and The Hornets”