The dawn chorus of the birds in Spring is an amazing medley of whistles, warbles, twitters, and chirps–songs of multitudes of birds greeting the new day. As the world turns from west to east the dawn moves from east to west, and the morning bird chorus moves with the dawn, so every day the earth is encircled with song.

Who are you redbird, sitting on a limb,
A long lost loved one, or dear departed friend?

Some people say a deceased loved one sometimes comes back as a redbird, i.e. a cardinal. They say seeing a cardinal is a sign that the spirit of the departed loved one is near. Here’s a couple of verses from the song “Who Are You Redbird“ recorded by bluegrass musicians Buddy Melton and Milan Miller. A subtitle might be “bluegrass boys contemplate reincarnation.”

Sometimes when I’m feeling blue and lonely
Skies are gray and I’m running out of rope,
I see you in the backyard checking on me
And hear you sing a simple song of hope.

The cardinal’s song really is a song of hope. It’s actually a kind of an advertisement. He’s trying to attract a mate. His bright red breast is stuck out. He’s leaning back belting out his vigor, vitality and virility, advertizing his sexual readiness. (We’ve all met guys like that.)

Redbird oh redbird what makes you sing this song?
“I’m gonna find the girl of my dreams, I hope it won’t take long.”

But that’s not all there is to this cheery song; there’s more to it than that. The plot thickens! After singing a few verses of the song the cardinal turned and flew straight at the window and smashed up against the glass.

Of course he can’t see through the window. All he sees is his own reflection in the glass, but he can’t recognize it as a reflection of himself. He thinks his own reflection is an enemy–an invader in his territory and he is determined to expel this intruder by any means, including violence. As I listen to this instinct-bound critter smashing himself against his own reflection in the window, I think about nature being full of lessons. There must be metaphorical lessons there for us humans. I have been pondering and reflecting on this question and asking various thoughtful people what these lessons might be.

I was talking to an academic, philosophical friend. I asked, “Is this testosterone poisoning?”  She said, “The issue is much less about testosterone than the evolution of our own identities. This cardinal has an identity problem.  He can’t recognize his reflection as himself. He’s trapped in dualistic thinking, (Me, not me. Me, not me…) and he doesn’t know how to get out of it. This instinct-bound cardinal hurling himself into the window is a lesson about the suffering that ensues from lack of self-knowledge.”

There’s a lesson: Lack of self-knowledge has consequences. Know yourself!

Redbird oh redbird what makes your face so black?
“I been hittin’ that window so durn long, lucky it don’t crack.”

My neighbor said, “Cover the window with a piece of cardboard or a tarp or something.”

I said, “The cardinal would just move to another window. Eventually I would have all the windows boarded up. I would be living in the dark and the cardinal would probably move to the car’s window or one of the side-view mirrors.” 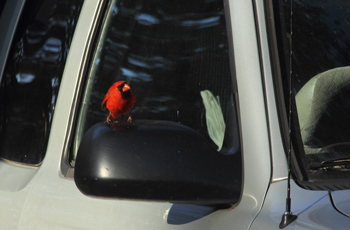 In life there’s always more windows and mirrors…and lessons. A window is there to give us a view into another world but the window becomes a mirror for the cardinal and the cardinal, like many of us, only sees himself. In our lives there are lots of mirrors. In some ways everyone we meet is a mirror, reflecting back to us who we are. If all our mirrors were covered we might not even know who we are!

According to Zen Buddhist teachings, the mirror is without ego and mind. A mirror receives and reflects back what isthere, nothing more and nothing less. Everything is revealed as it really is. So the cardinal is revealed not only as a vibrant, beautiful, brilliant red bird in the mirror–it’s also revealed to be an intolerant, violent, territorial  being. We humans are also known to have intolerant, violent, and territorial tendencies like the cardinal, but like the cardinal, we are also vibrant, brilliant and beautiful in many ways.

Buddhist masters also point out the mirror is not self-conscious. Neither is the cardinal, and that’s a big problem!

Magic mirror, won’t you tell me please
Do I see myself in everyone I meet?
Magic mirror if we only could
Try to see ourselves as others would.
– Leon Russell

What about the singing? This cardinal pauses in the middle of this battle with a fierce, evenly-matched adversary, to sing? What is that all about?

The singing, along with being a courtship song of hope, (Come on, sweetheart!) is also a way of defining and defending territory. This is true with most bird songs. 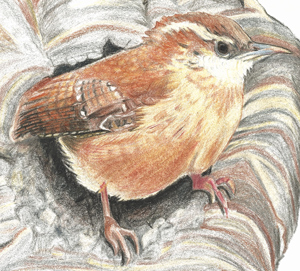 A birdsong expert who’d spent years studying the songs of the Carolina wren told me that when a Carolina wren sings, any male wren in an adjoining territory within hearing distance is instinct bound to stop what he is doing and answer. So, if one wren has a better territory, or a better physiology, and can finish his feeding, nest building and courtship activities sooner, he can begin singing and literally (melodically) drive other wrens out of their own territories. After telling me this, that ornithologist kept shaking his head morosely and repeating “I wouldn’t want to be a wren…” And all we humans hear is the sweet song of the birds.

A classicist told me this is reminiscent of Plato’s “Analogy of the Cave”, which is a commentary on society in general. In this analogy there are three prisoners who have been chained since birth in a cave, and they are secured in such a way that they can only look in one direction–at the back wall of the cave. Behind them is a fire in the opening of the cave and there is a procession of people and animals passing between the prisoners and the light. All the prisoners can see are the shadows cast on the wall, and to the prisoners these shadows are reality. When one of the prisoners escapes, goes out into the world, sees what the world is really like, comes back and tries to tell his companions what he saw, they don’t believe him. Plato was trying to say that what we perceive is not always the only reality–the only truth.

The cardinal perceives a rival when it’s only a reflection of himself. And just like the cardinal, what we humans perceive as reality might actually be a reflection of ourselves or a mere shadow of what’s really there.

Although Plato wrote it more than 2000 years ago, this analogy can remind us modern humans, as we spend countless hours fixated on our smart phones, TVs, and computer screens, that those images on the screens, like the shadows on the cave wall, can become our reality when they are really only shadows. They may be full color, ultra high definition, digital images, but they’re still only shadows–and this ancient analogy of the cave reminds us that we would do well, now and then, to look up from our screens, turn around and gaze out at the real world.

Computer geek, computer geek, what makes your eyes so red?
“Been staring at that screen so durn long it’s messin up my head”

My psychotherapist friend says it sounds like the cardinal has issues with projection. Psychologists use the term projection to describe how we humans often see and project our own flaws onto others — we tend to see our own undesirable traits in other people.

Can’t you see that cardinal looking at his own reflection and saying, “Why you bright red, xenophobic, puffed-up, feather-breasted, crimson-crested, bird-brained, black-faced, thick-beaked son of a bird, What is it about ‘What-cheer, what-cheer,chirp-chirp-chirp’ that you don’t understand?” (smash, smash, smash!!!)

Redbird oh redbird what makes your head so red?
“I been hitting that window so durn long, lucky I ain’t dead.”

In response to my article above, I got this interesting note from But Kornegay:

Thanks for sending the Redbird blog, with all the lessons to be read into and/or taken out of it. We had a cardinal here one time like the one you describe smashing into the window daily all summer. It would hit so hard right next to where I was sitting in my study that it’d startle me. I named him Tarzan. That bird hit the window so hard and so often that the window became covered in bird snot. One day, after months of this, with relief, I found him lying in the grass, dead. I think it had scrambled his brains. Below is a photo I took of the damn (or was it damned?) thing before his demise. So, that song lyric in your blog could be written…

“I been hitting that window so durn long, finally I am dead.” 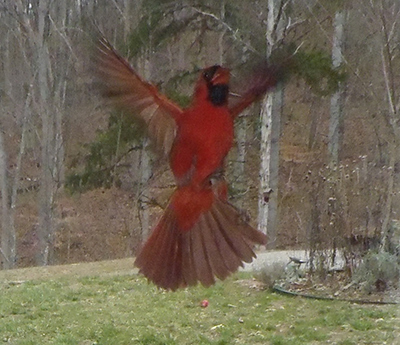 This year we have something very odd going on. It’s the female who sings and fights her reflection in the window! I’m not kidding. The male seems to be emasculated. (Or maybe he’s gotten smarter than his predecessor.) He’s content to perch and preen and get something to eat–let her take care of the territory and all that stuff. I’ve named the female Amazon. Warped feminism has even infected the birds.

You mention Plato, and by chance I’ve been reading some of his Dialogues this spring. In the analogy of the cave, the reflections on the wall are all the things of this earth, unreal, mere changing shadows of reality and truth. Only when a person becomes philosophic and turns towards the light through hard and disciplined thought and purity of heart does he begin to see the eternal, unchanging ideas, the form of the good.

(Thanks to Emily Lutken for the wren illustration, Todd Elliott for the original photos, and Burt Kornegay for his comments and photo of Tarzan.)

For more literature, lore, stories, and songs celebrating the natural world check out my web store.