Of Ginseng, Golden Apples, And the Rainbow Fish

This recording is also available for sale as a digital download at Bandcamp.

Doug Elliott visits Appalachian storyteller Ray Hicks, who is famous for his tales about the mythical folk hero Jack. Along with Jack’s exploits, Ray tells a few of his own hair-raising adventures, like when he was followed by a panther. He also recounts colorful folklore about the love life of ‘possums, bloodsucking owls, and tips for successful ‘seng hunting.

Driving home with his head full of wild tales, Elliott embarks on a true modern-day mythic journey where he catches a trout by hand; harvests wild apples, ginseng, and mushrooms; ponders Greek myths, Biblical verses, and the fungal web of life; meets three strangers; and finds himself living out his own folktale.

You’ll hear a poem by William Butler Yeats, quotes from the Roman poet Ovid, and a risqué herbal ballad by the great botanist Jim Duke. You’ll find out what happens when Artemis (aka Diana) gets caught skinny dipping and when Atalanta loses a foot race, as well as what happens when Jack leaves home to sell a cow and comes back with a rock. In this live recording of a standing ovation performance at the National Storytelling Festival, Elliott is accompanied by guitarist Keith Ward and his son Todd Elliott on fiddle. 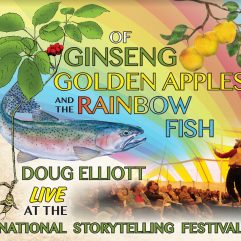 You're viewing: Of Ginseng, Golden Apples, And the Rainbow Fish $10.00
Add to cart